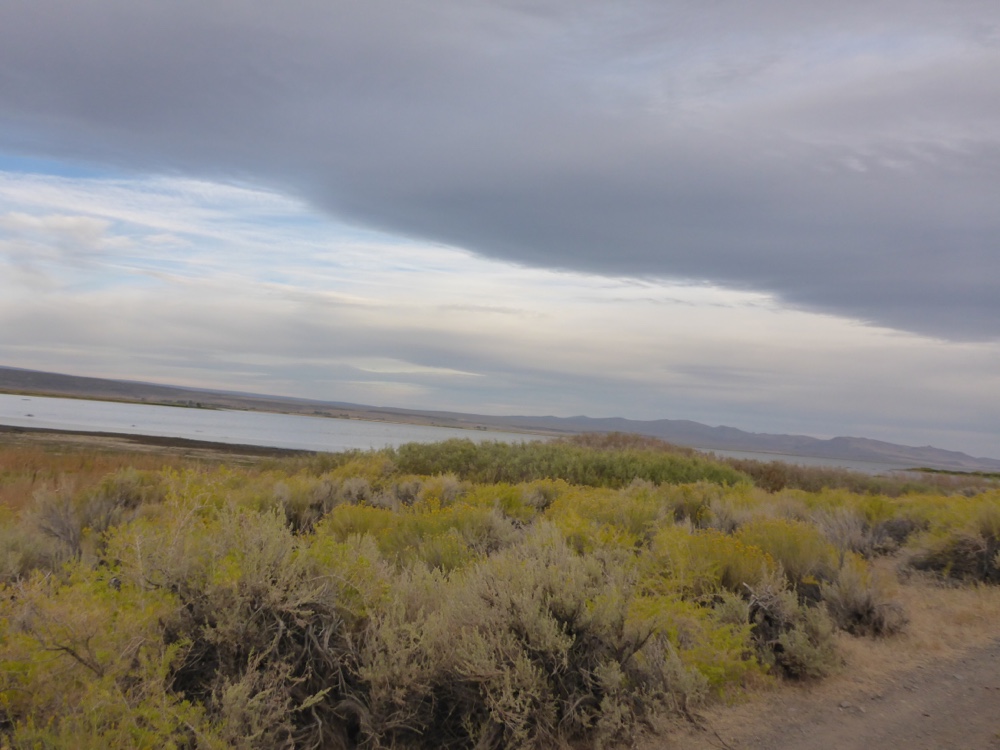 A rare cloudy day in the ODT

I woke pretty groggy from the lack of sleep the night before from all the foot pain.  I decided to leave the KT tape off as my foot felt better without it and that is how I walked out of camp.  The road we had finally found last night was still pretty overgrown, in about half a mile there was a metal gate across the road so we climbed over it and then found ourselves ankle deep in a spring of sulfur smelling mud that seeped into our shoes and through our socks and between our toes. 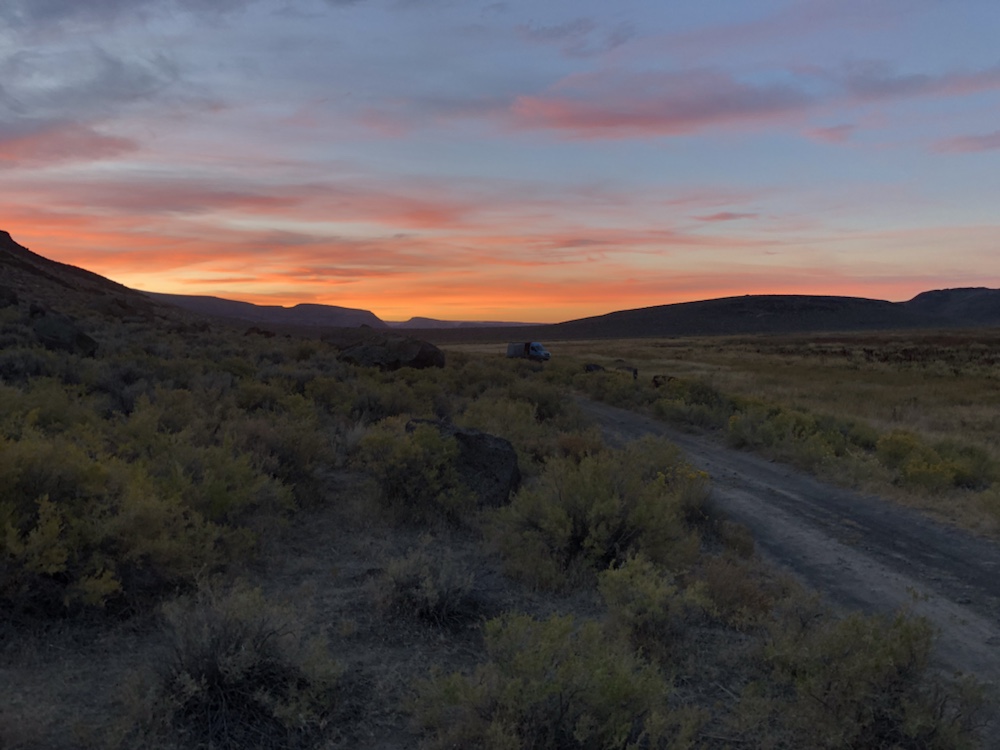 About an hour from camp as the sky was starting to change color we saw Ron’s van parked overlooking the lake.  We woke him up and chatted for a few minutes and arranged for him to pick us up where the trail turns away from town so we could a save ourselves 2 miles and 40 minutes of walking on the pavement while still keeping our continuous footpath.

As we walked along the trail we came across a series of boulders with petroglyphs.  It was awesome how many of them were all over the place.  We took some photos, speculated at what some of the drawings were and each interpreted our own meaning from the ancient messages.  The next leg of our hike took us around the lakeshore on a paved road.  Where the road meets the trail there were two privies so we pulled over for a break.  While sitting there eating a snack we met some folks from the BLM who were out spreading gravel on a nature path as part of the events for national public lands day.  We chatted for a bit about our hike, then knocked out the last 3 miles in no time, making 15 miles by 10:30am. 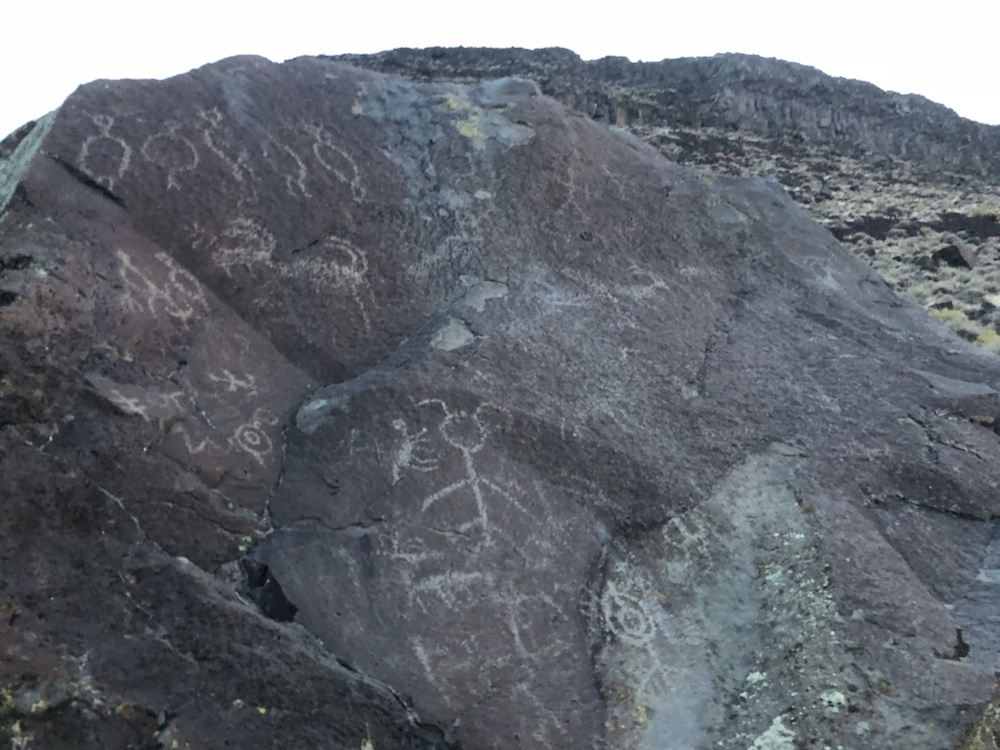 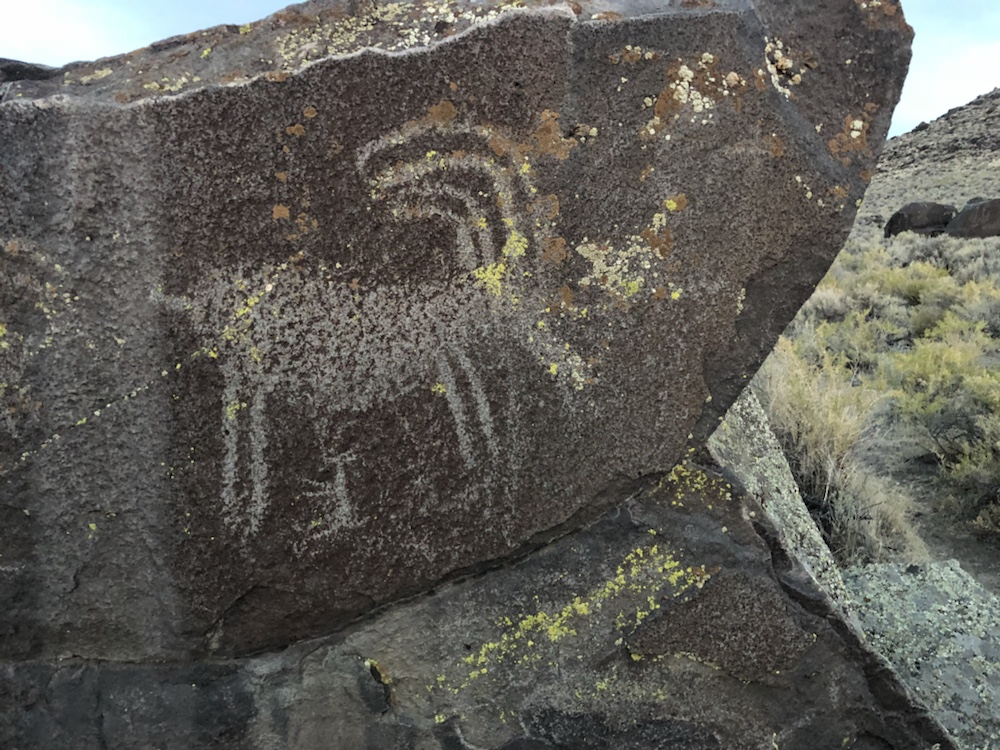 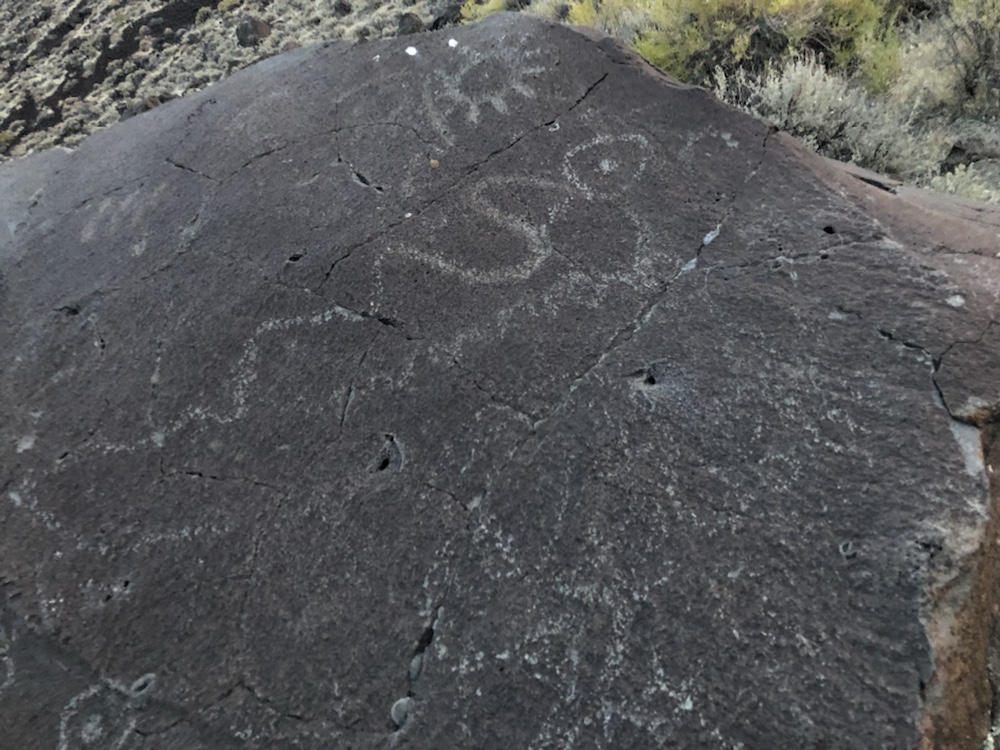 Now before arriving in a Plush, we had been told by two of our friends that “Plush ain’t got shit”. So as we pulled up in front of the small store that comprises of the town of Plush we had low expectations.  We were also told the burgers were incredible, so I ordered a double bacon cheeseburger basket and a large coke and set about organizing my box.  After a few minutes, I did a little shopping for a few items I needed, chips, cookies, and a fresh Avacado.  I was shocked at how well stocked the store actually was.  Then my burger arrived, damn it was awesome a big old double patty grilled to perfection.  Since we have arrived in most of the trail towns after everything is closed and leave well before anything is open, this meal was a real treat for me.

After lunch, we were outside packing up when my good friend Renee “She-Ra” Patrick who is the trail coordinator for the ODT pulled up.  She had been out for a hike herself and was planning to meet up with us.  We hung out for an hour, enjoyed a beer and picked her brain on the upcoming terrain.  Then she and Ron dropped us back off at the trailhead and we were on our way. 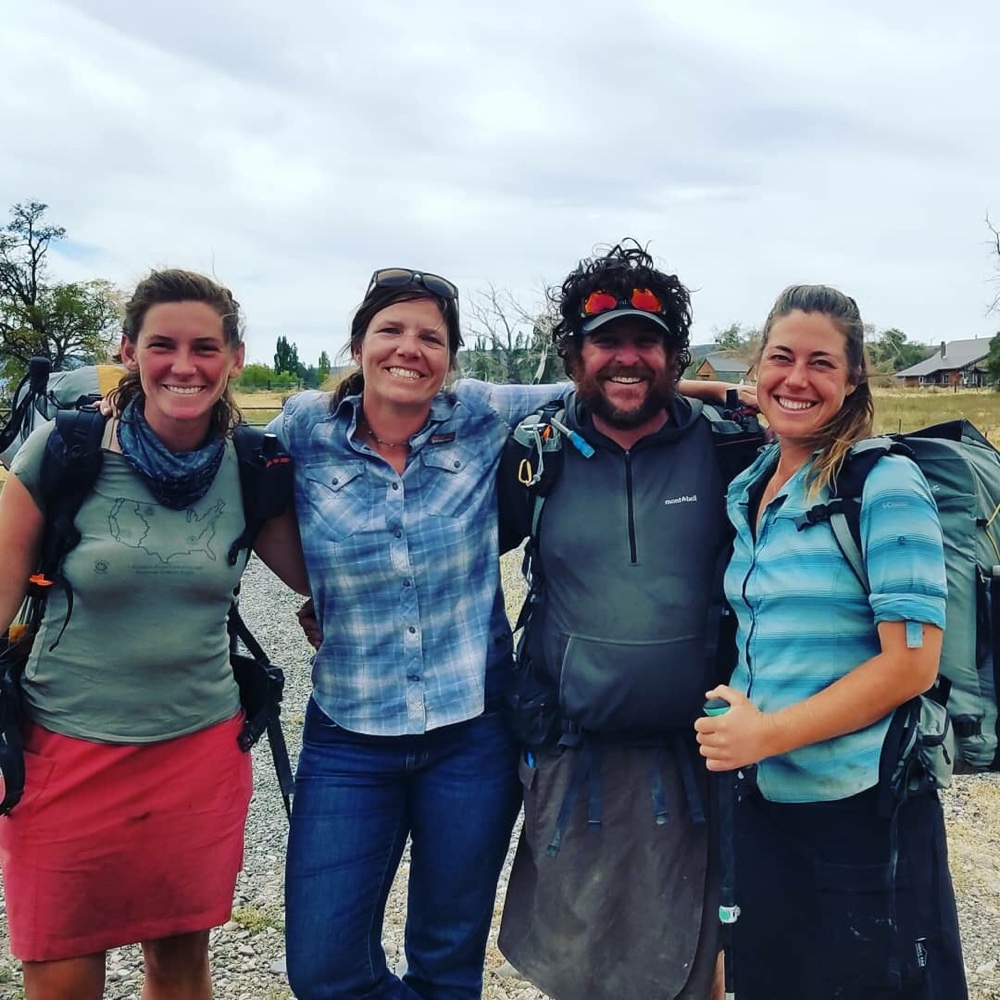 The trail was a series of dirt roads, all of them were in good shape.  We rolled along making good time.  Eventually, as we made our way up the draw we saw Ron stopped at the bottom of the next hill.  He was contemplating if he should give it a try so he could camp with us one more night.  He went for it and a mile up the road. at the top of the hill, he sat there and informed us the roads were too steep to risk it in his van.  We parted ways and agreed that he would grab us on the highway in a couple of days to get us into Lakeview so we could save time and avoid having to waste time hitchhiking in and out the town. 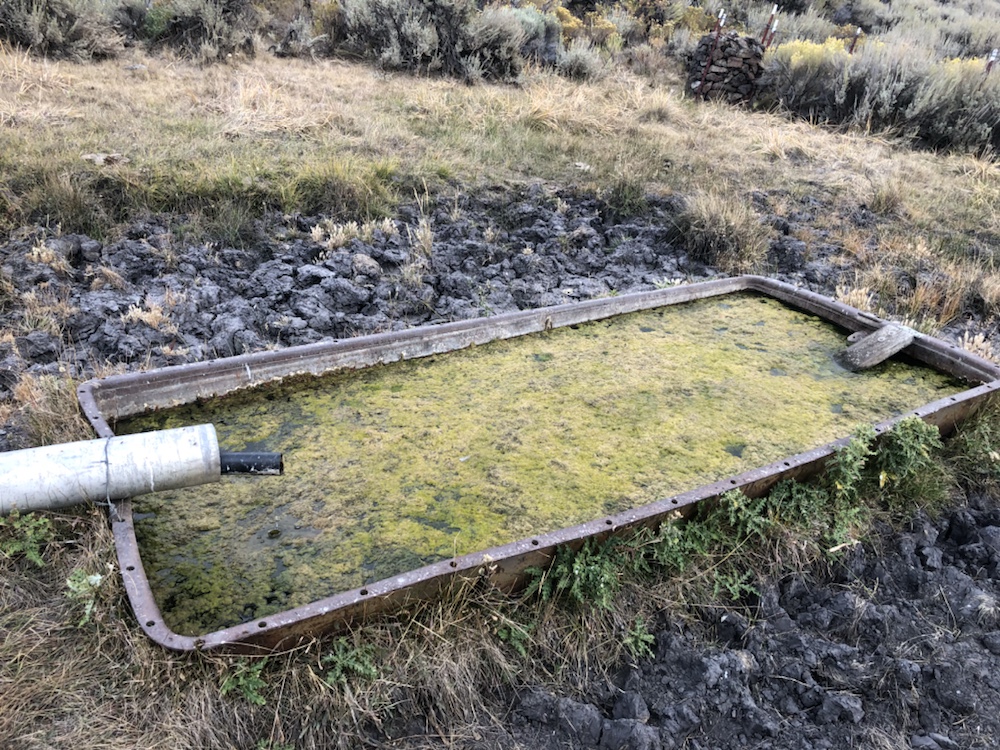 Thankfully I had enough water to avoid drinking this foul muck 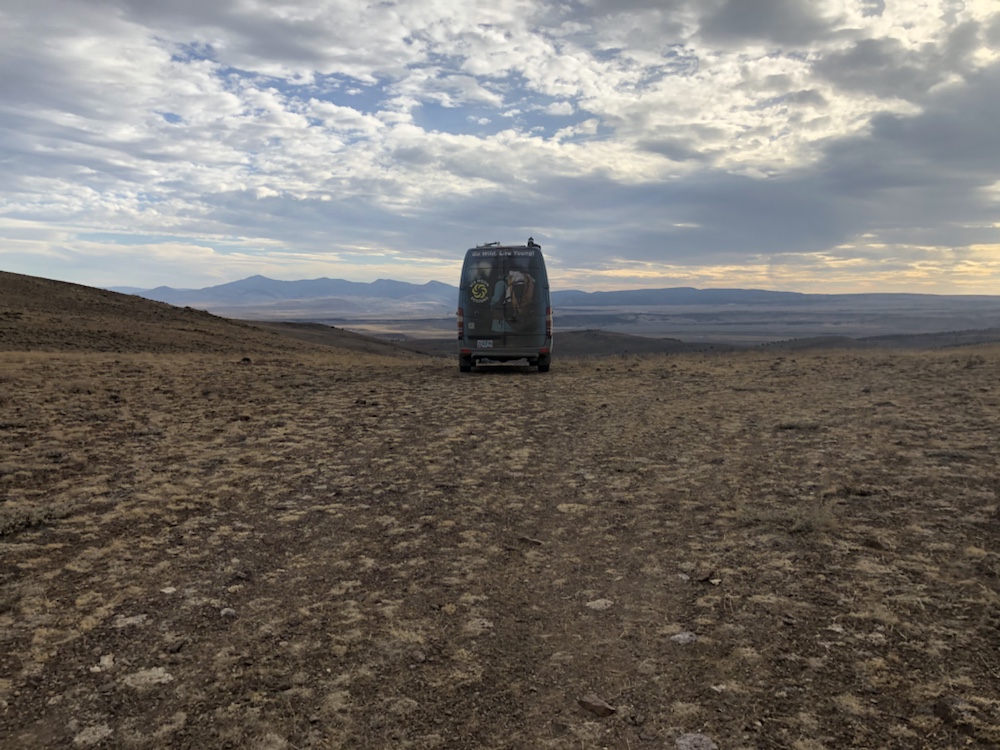 Ron doing what he does, taking his van to new heights

We walked the hills in the soft light of sunset and as we turned a corner we saw an old dry pond bed full of short dry grass and decided to camp there for the night.  It was a little windy but we each snuggled down in our Katabatic quilts and got lost 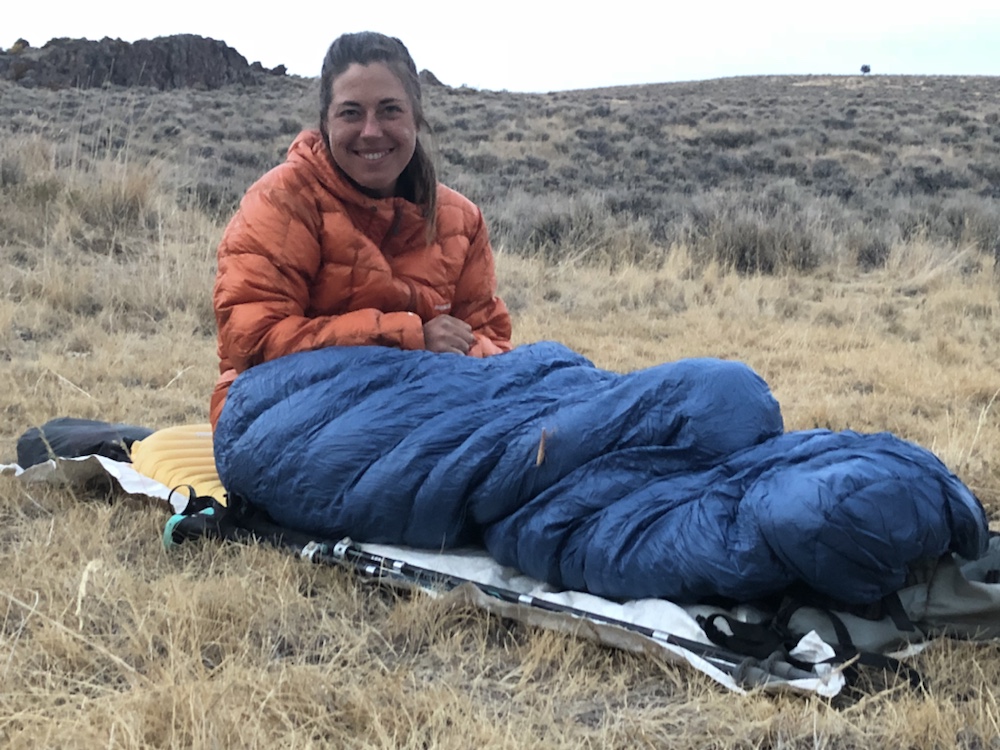 Salty sung in her Katabatic Flex 15, even the praying mantis agrees that katabatic quilts are the warmest