Day 27 Christmas Valley, but no Santa 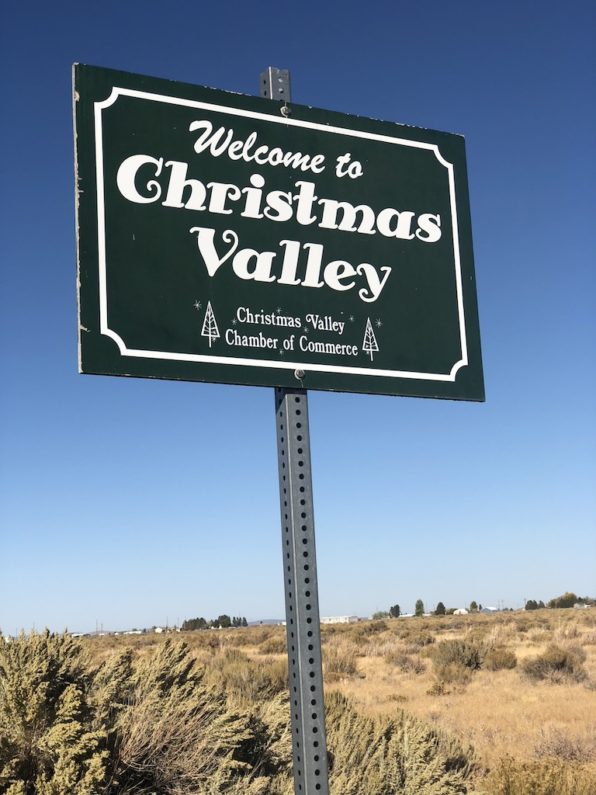 Christmas Valley, where bad girls and boys got meth not coal.

We decided to sleep in a little bit today, we knew we had to continue with the cross country across Diablo Rim and we all decided to do so in the darks a bad idea.  As the sun started to give the terrain some texture we all set off on our next leg of the trail.  Like most days recently we were under the gun for time and had a deadline to meet.  Today’s deadline was getting into town before the Post Office closed so we could get our final resupply of the trip.  Salty and I had boxes at the PO, but Swept Away was lucky, her cousins live in Christmas Valley and her mother had dropped her resupply off there so she wouldn’t have to worry about the PO closing.

We finally ended the cross country and hit a dirt road that we could see began climbing up a canyon.  The three of us were spread out I was in the lead, as I walked up the road all of a sudden I head something running, I looked to my right and spotted the source of the sound a group of wild horses running up the canyon off to my right.  I stopped and watched the majestic horses as they ran effortlessly through the sagebrush.  I took a few pictures and videos before continuing on.  I arrived at a road junction and dropped my pack.  This was the location of our next water cache.  Salty and Swept Away arrived and the 3 of us fanned our looking for the cache after a few minutes of scouting around we located the cache under some camp netting. 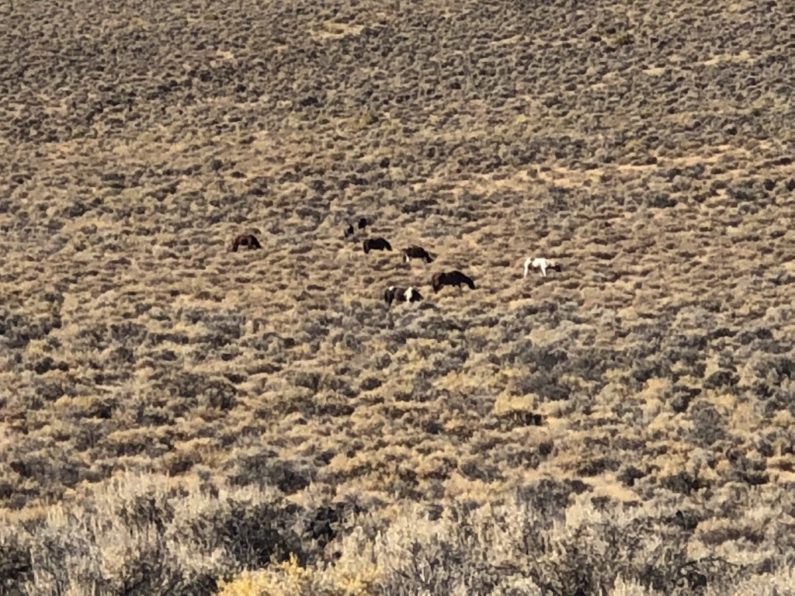 Wild Horses, not the greatest picture but I did see them

We each grabbed a gallon and then sat down for a snack while we filled our various water containers.  Once the break was over it was decided that Salty and I would push on as hard as we could and Swept Away would meet us in town, this way we could make the PO and Swept Away could take her time and not feel the pressure to push too hard all day.  With that, we all headed out, in about a mile we realized that our cross country hiking was about to be extended.  The trail had us going down into a canyon and then climbing up it steadily to reach a road that led into Christmas Valley. 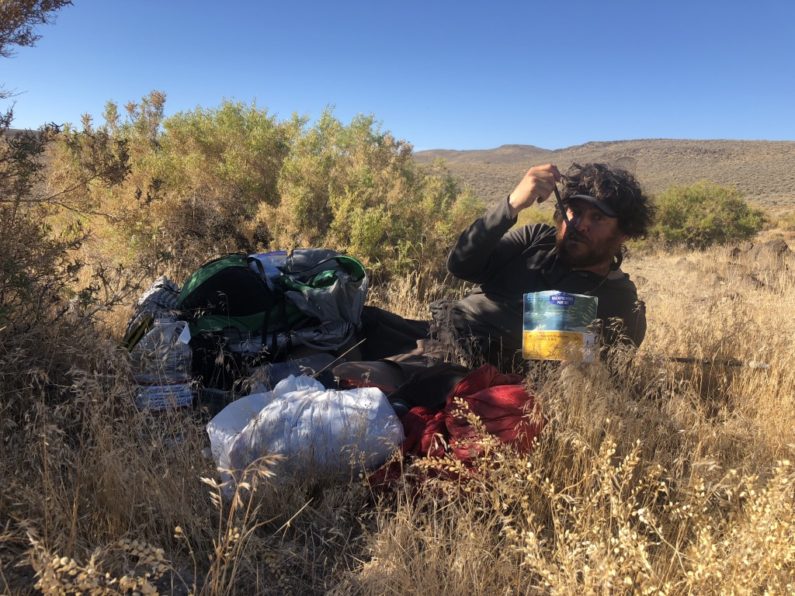 Enjoying some food before crushing miles into town

We dropped down under a fence and made quick work getting down into the canyon, the next few miles were tough though.  We had to pick our way up the canyon on loose ground and through numerous types of sage and other grasses.  The Sun was hot today too and the temperature was climbing as much as we were with each step to the canyon rim.  Salty and I finally crested the ridge and decided to cut off a few miles bu beelining it for the road to town show on our map.

We finally reached the road and much to our surprise there was a series of junior trees along the road providing some shade.  We decided to stop for one last caloric intake before pushing the rest of the way to town.  We plopped down in the shade and beat consuming numerous amounts of calories.  With full bellies, we started to pack up, right as we were getting ready to go Swept Away showed up and she plopped down for her lunchtime snack.

We took off and told Swept Away we would text her for a meet up once we hit the Post Office.  The walk to town was hot, we were on a dusty road and could see Christmas Valley far off down below us.  We made a few miles and came to a trailhead where the dirt road ended and the 4.5 miles of pavement to town began. We stopped to quickly empty out our shoes of sand and little rocks then We headed out using our pace as fast as we could.  The paved road had a fair amount of traffic so we hugged the shoulder as much as we could.  About halfway to town we passed a large ranch growing alfalfa, they had large overhead sprinklers watering the crop, so Salty and I walked under them for a little way enjoying the cool water as it sprayed us down from above. 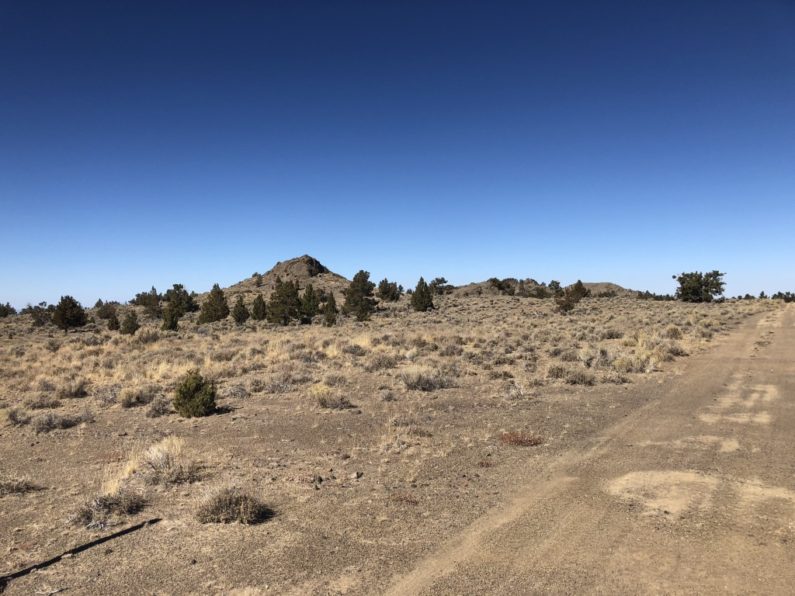 The road to town was hot and dusty

Finally, the road came to a T at the main drag of town.  We turned left and started walking to the Post Office which turned out to be nearly a mile down the road.  As we walked we spotted a bank sign with the time and temp showing, 93 degrees, that explains why we were so damn hot and thirsty.  We finally arrived at the PO around 4:15, as we walked up a lady stopped and got out of a car and said to me, you must Kates friend, maybe it was the heat, or the fact I call Swept Away by her trail name but it took me a minute to calculate that this lady was Swept Away’, cousin.  We chatted for a few minutes before we went in to get our boxes.

Once inside the Post Office we quickly became the spectacle for the locals to gawk at.  We got our boxes and quickly went to a table to sort what we needed and send home what we didn’t.  Within minutes I had a full on yard sale going right there in the PO, as we sorted we got stared out, and a few locals even inquired what we were doing, often when we told them they looked at us like we had lobsters crawling out of our ears, and one guy even questioned if we could really walk to the coast forest.  For the record, the lost forest was only 30 miles away and we would be there tomorrow if all went well.

Salty decided to mail her tent home, the forecast looked good so she figured why bother with carrying it when all we do is cowboy camp anyway.  We quickly got our food sorted and packed a box back to Portland with our extra food and Slaty’s tent.  With that, we headed up the road to meet Swept Away.  Halfway to Swept Away we stopped into a covalence store as we were parched beyond belief, we quickly downed some cold beverages and enjoyed how the locals just pulled up in the parking lot and stared at us like we were some strange aliens who had just landed in a crop circle on one of the farms in the valley.

We trudged down to the road and came to the large gas station where Swept Away was waiting for us, as we walked up I saw a sign on the building with a chicken that said Coopers Express, I looked at Salty and said, “I’m about to make a lot of bad choices” a fried chicken, Mac and cheese, biscuits, and large soda later I was right, and as the sun was starting to set the three of us departed our hour dinner stop and hiked on down the road towards crack in the ground.

The road took us through the outskirts of town and past some large farms that were running equipment well into the night to harvest alfalfa.  After many miles the moon was coming up and since we were on a dirt road surrounded by sage bushes we found a place off the road and called it a night.