Have a listen to The Trail Show Episode where “Snorkel” and I talk about our hike in detail.

You can read more about our trip and the Chinook Trail here:

The concept of the Chinook Trail originated in 1986 with two lifelong hiking companions, Don Cannard and Ed Robertson standing on the summit of Silver Star, a 4400 foot peak noted for its glorious wildflower displays.  The two dreamed of a trail going through the Columbia River Gorge high country. Originally, the trail was only going to go through Washington, but then the Forest Service suggested a bi-state loop going through Oregon and Washington. Others agreed enthusiastically, and in 1988, the Chinook Trail Association was born.

The original concept developed into that of a 300 mile rim top loop trail which would encircle the Columbia River Gorge. An additional 200 miles would be designated connector trails which would work in conjunction with existing trails such as the Pacific Crest Trail and communities in the Columbia River Gorge area. The first section of new trail, the Squaw Butte connector which connects Silver Star to Washington’s Larch Mountain, began on National Trails Day in 1993 and completed a year later.

Now designated as a National Recreation Trail (1995) the trail is yet to be completed and only has 33 complete miles so to speak.  The Chinook Trail Association is reinvigorated and hoping to move forward building the trail and complete the vision of Don and Ed.

In 2014 Myself, “Tomato” and “Snorkel” (www.eathomas.com) set off on the very first thru-hike of the ChnT.  We started the process with little more than what is written above and 1” x 3” map of the Columbia River Gorge with a line drawn where the trail should go.  We spent months planning, looking at USGS quads, gazetteers, and Trail Illustrated maps to determine how we could hike this route and have continuous footsteps.  From paper we moved to making our own map set on Trails Illustrated and we made sure to have large area maps in case we need to make changes on the go if say an old trail did not exist or we needed to bail off, this was very helpful when Snag Creek Trail no longer existed.

We started our hike at Moulton Falls State Park in Yacolt, WA, for the next few days we traveled east along trails, Forest Service Roads and WA state land to the town of White Salmon, WA.  We were met there by my wife Suzy and Tomato’s girlfriend Aimee who brought us a resupply and picked up Karluk who could no longer take the heat wave that had started two days earlier.  We spent a night in Bingen, WA and the continued east on SR14 following the Lewis & Clark trail, headed up the Klickitat Trail and down the gorge wall to Maryhill State Park.  A quick car ride over the Columbia River to avoid a very dangerous bridge crossing, dropped us in Biggs, OR.  From Biggs we followed the historic Oregon Trail to The Dalles, OR where we celebrated the 4th of July.  We walked roads to Moiser, OR caught the Moiser Tunnel trail and enjoyed some of the greatest hospitality in Hood River, OR.   From Hood River we were able to connect to Starvation Creek and the summit of Mt Defiance, from there we continued west on the Mark O. Hatfield trail through stunning old growth forest and high bluffs ending our hike at Angel’s Rest in the Columbia River Gorge.

This trip had many highlights including picking berries along the way at a U-Pick in Hood River, some of the largest old growth cedar trees I have ever seen, and the people we met along the way.  One of my favorite stories of the people we met were the friendly ranchers we met in the eastern parts of OR and WA.  On our way from the top of Swale Creek Canyon we had to walk through high desert along roads in ranch land.  We pulled up in front of a house to take break in the only shade around for miles, while sitting there a truck approached, we packed up quickly thinking we were about to be run off, instead we had a rancher ask us if we were lost, needed any food or water and then told us about his hike of the state of Washington along the PCT.  This trip helped me realize that the east side and west side residents of the Columbia River Gorge all care for the land and are willing to help their fellow man when needed. 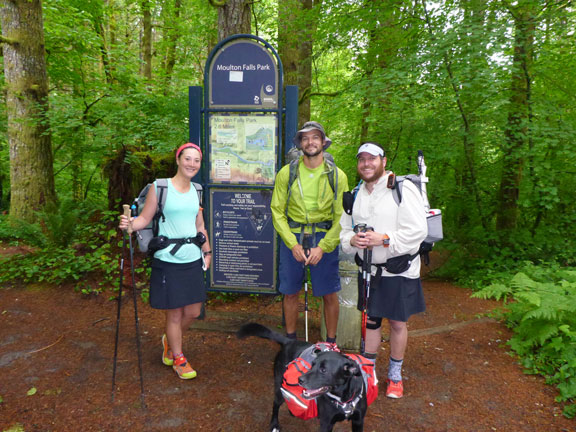 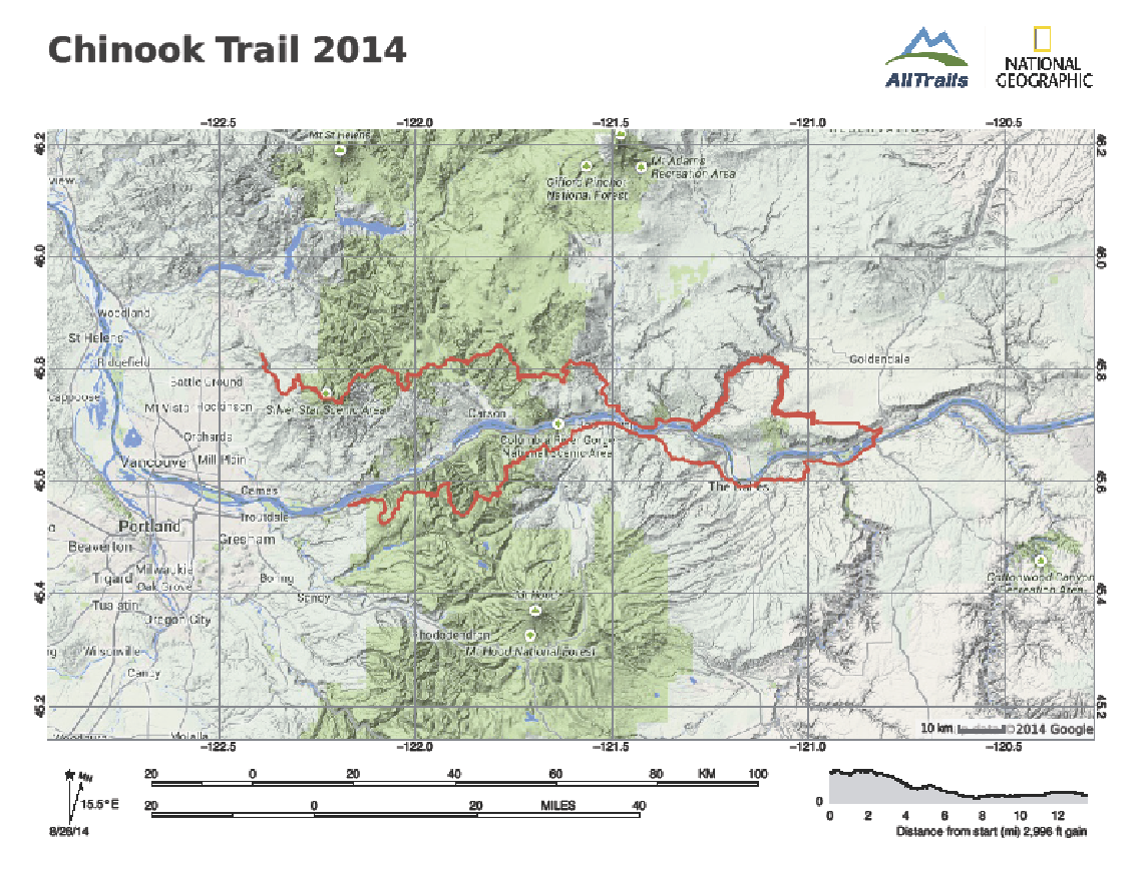 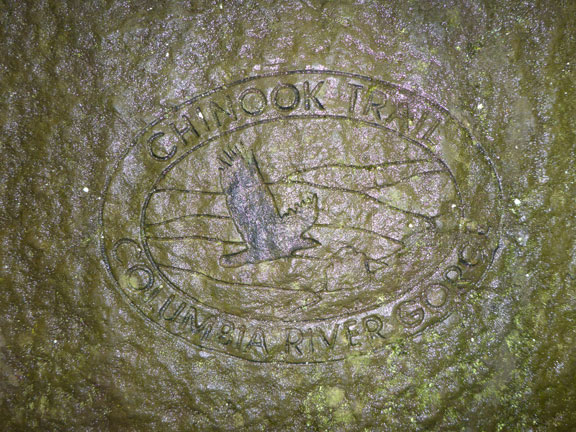 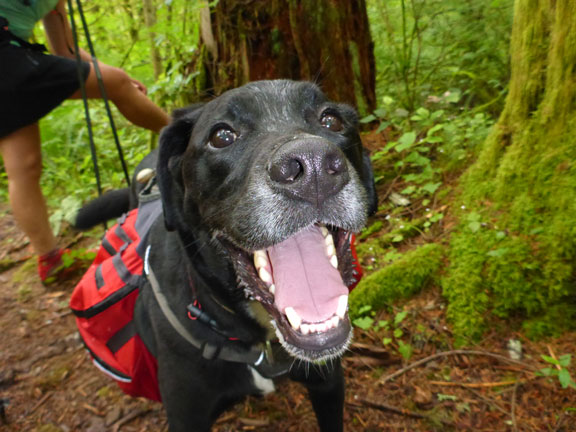 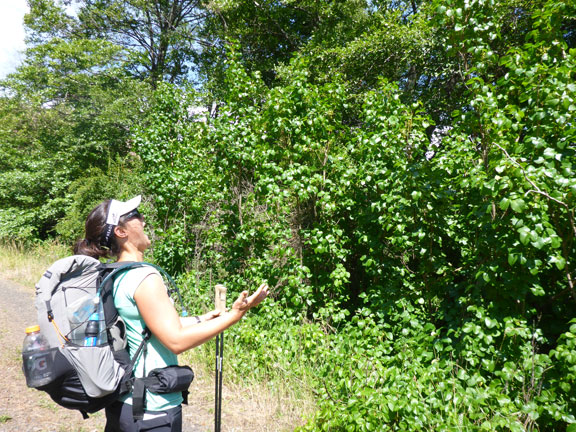 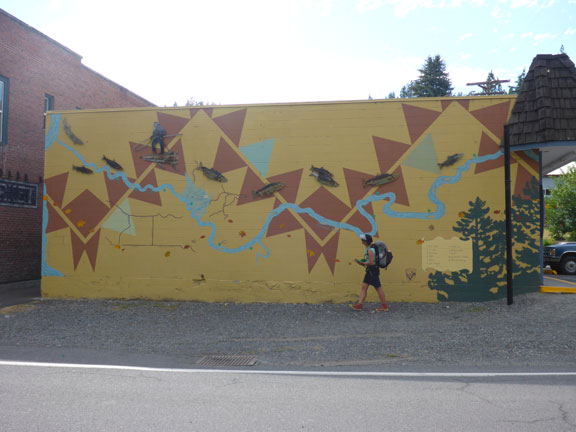 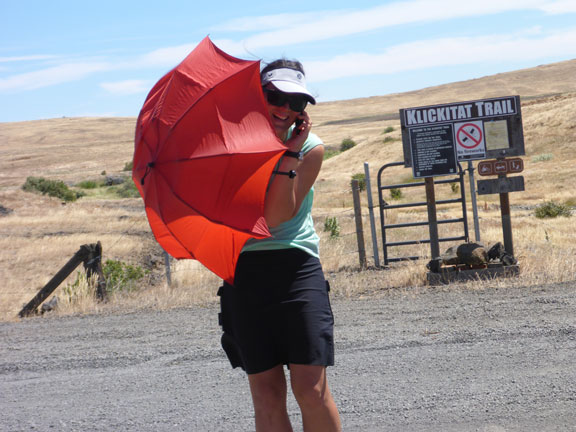 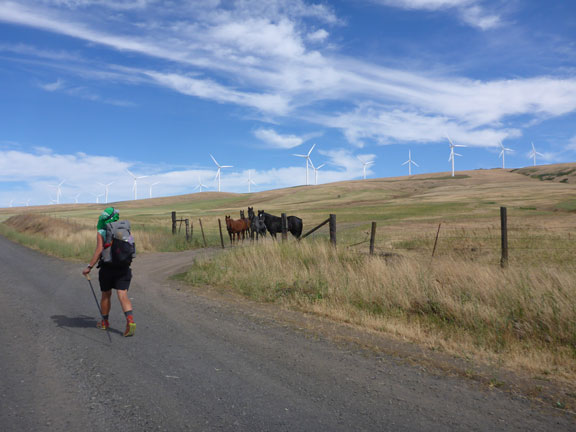 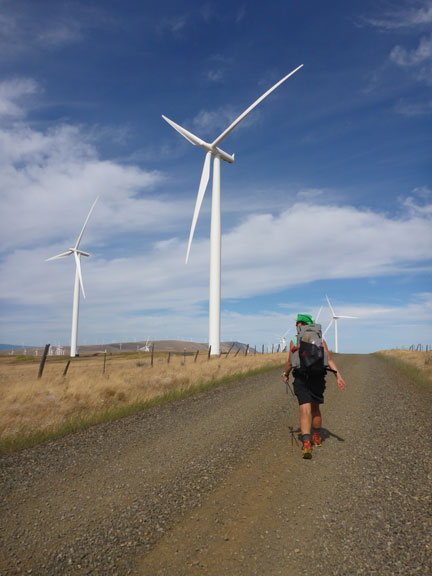 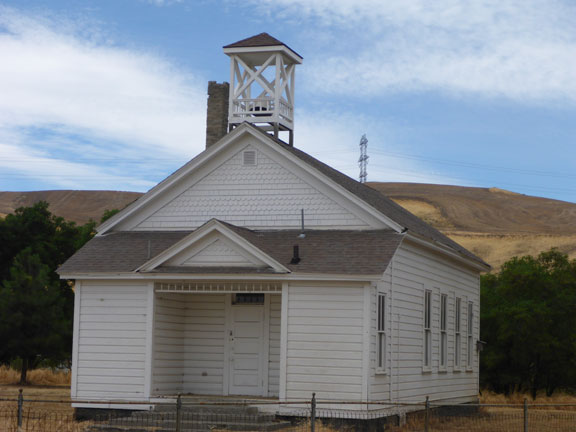 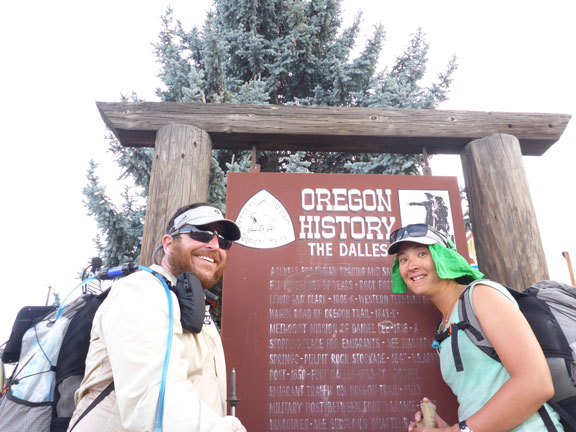 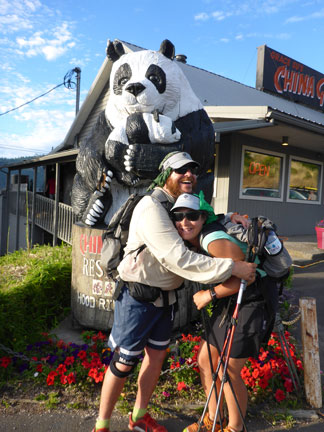 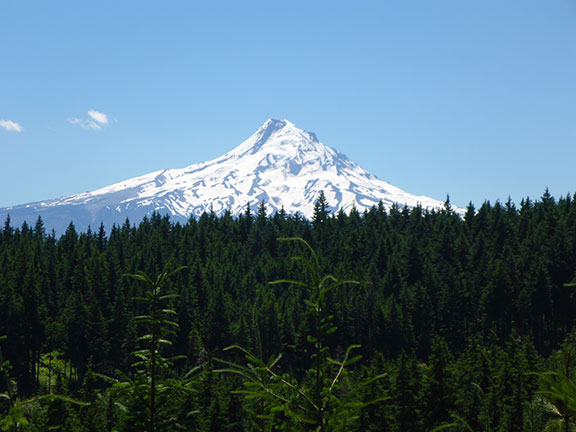 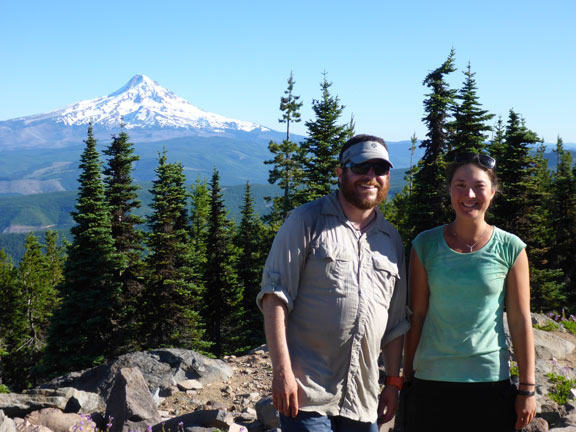 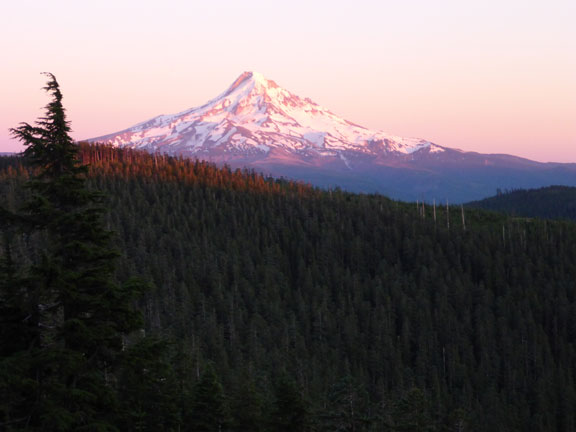 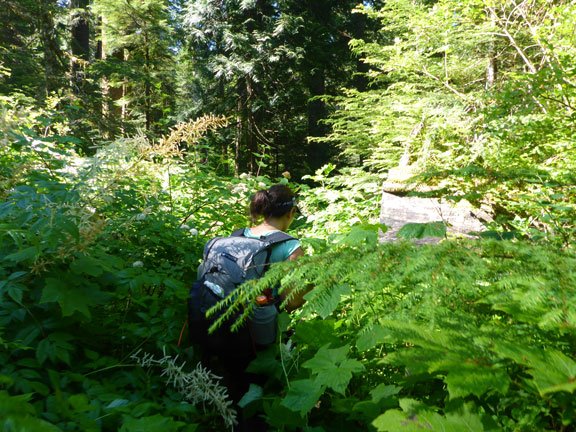 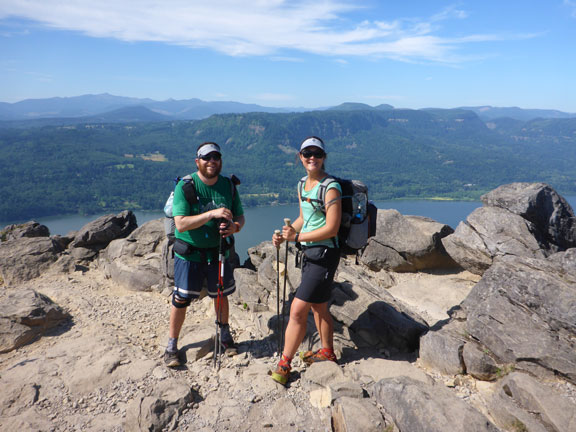 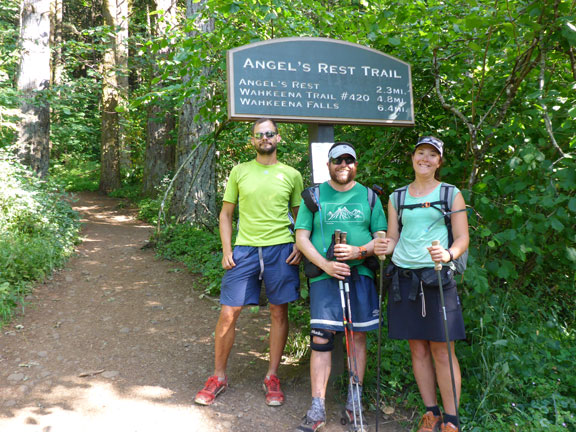