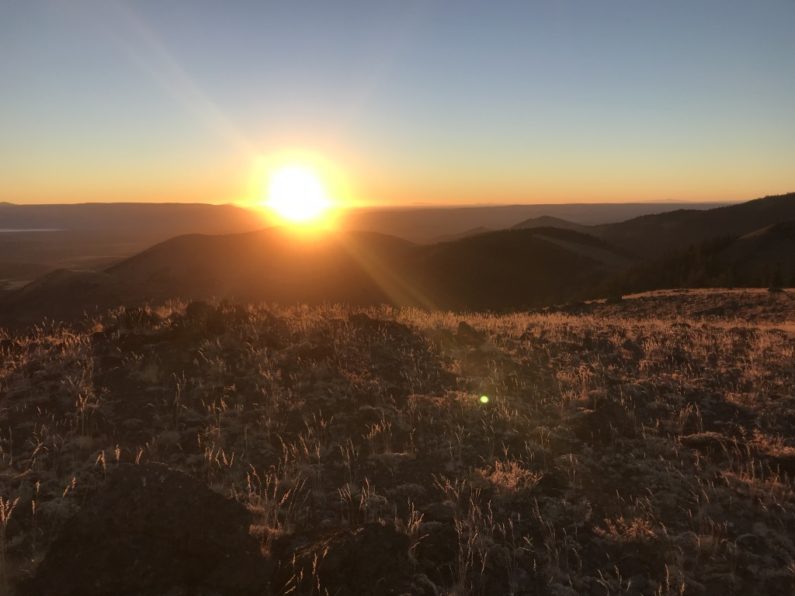 It would be hours before the sun rose, yet as the disciplined hikers we are, we donned headlamps and started on our way in the dark.  It was hard to find the trail in the dark, but after a few minutes of scouting around, we were on our way. We climbed steadily uphill and commented how lucky we were to stop last night when we did, as we didn’t see any flat spots.

The trail was super cushy this morning, our continuation on the Fremont was a real treat, the trail is so well marked we barely had to check our way all morning.  We walked as fast as we could, every step we took got us that much closer to town.  As we strolled along making the best time so far this entire hike we each talked about our town dreams and desires.

I longed for food, massive amounts of Chinese food in particular since both Virgo and Dirt Monger had to told me the Chinese food was really good.  Salty just wanted some time to sit and chill for an hour in town, enjoy a meal and then be on our way, Swept all she wants is a shower….frankly we stink horribly.  Our last shower was on day 11 in McDermitt at mile 212, and we have yet to do real laundry this entire time, so as we close in on 540 miles of hiking you can imagine our smell could knock a buzzard for a shit house.

The trail wound wonderfully through a forest of pines and aspen trees, the fall colors were just amazing, with the Aspens going from golden yellow to auburn, each grove was more stunning than the last.  The Traill started to lose some elevation and the then followed a creek for a long way.  The air was super cold today and being in a gully by a creek had us smack dab in the middle of a cold air sink in the forest, so we pushed our pace faster to stay warm.  Eventually, the trail became an old dirt road and the three of us walked side by side chatting about life. 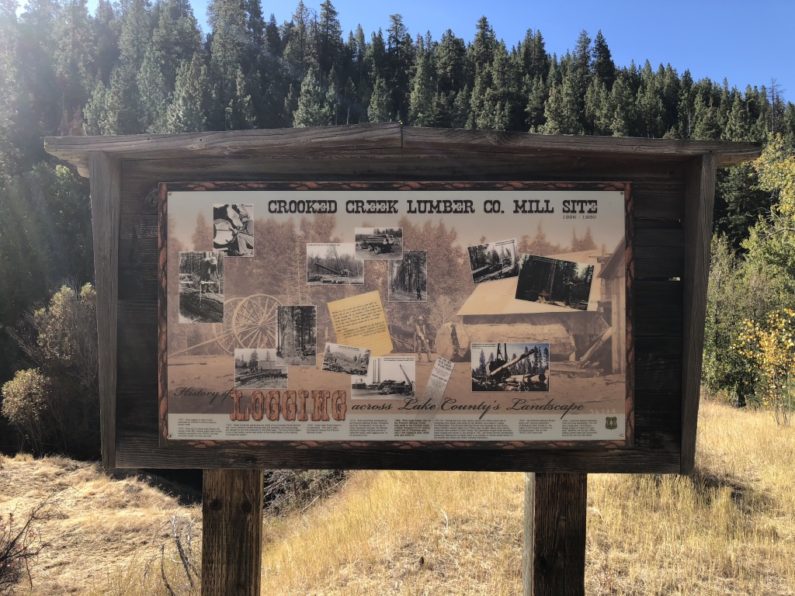 Even though we are pressed for time there is always time for a quick history lesson of the region, after all isn’t learning about where you are traveling all part of the experience?

Right as we were beginning to see the paved road off in the distance we came to a cattle guard on the road, and low and behold there stood 3 cows, a Mother, and 2 youngling calves.  I spoke calmly to the cows to try to settle them but as we got closer they panicked, the Mother and one Calf ran towards us barley missing Swept Away, the other Calf, ran straight up a hill and through a barbed wire fence breaking the wire.  It ran away so fast there was nothing we could really do for it, hopefully being so close to the ranch the cow will be found and is OK.

We trudged down the road and saw Ron waiting for us a mile away from where the dirt met the pavement.  It was early still os we asked Ron to meet us 4 miles up the road so we could get the pavement stretch over with before going to town.  An hour later and we were all in Ron’s van heading down the road to Lakeview OR for our resupply box and a town meal. 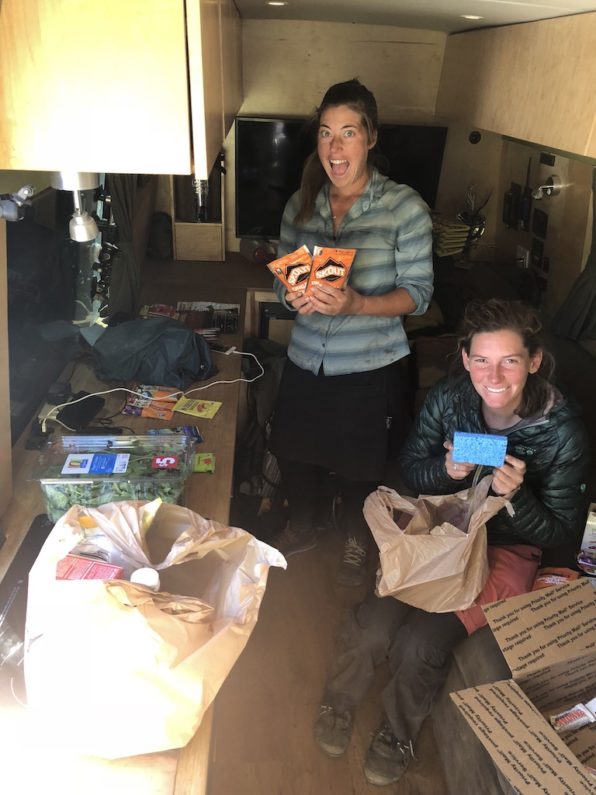 A quick sort of our resupply in the Van before heading back out. I think Swept Away’s smile says it best about how nice the new sponges are

Swept Away worked on her phone trying to find anywhere in town where we could shower, a truck stop, a laundry mat, hell even a fire hose behind the station but alas it was not to be.  We arrived in town and went to the post office waiting for us was an amazing box of food from Dylan “Pickle” Tonkin.  He had just finished up the PCT and had extra food so he sent us one hell of an epic resupply box to share.

Everyone had told us to go eat at the Chinese restaurant in town so we parked out and front and headed to the door only to find it was closed for a few days, damn it!  Off to the only other choice in town besides subway, a dinner next door to the grocery store.  We walked into a somewhat crowded room, knowing that we smell we chose a table as far away from people we could, but a few minutes later we realized it was not far enough, because one table got top and moved away to the other end of the place.

We ordered food, chowed down and then walked to Safeway for a few items to top off our resupply.  This was the first real grocery store on the entire trip and all the choices were a little overwhelming, but we did our best to grab what was essential and get out.  In just about 2 1/2 hours since Ron picked us up, we were fed, resupplied and back at the trailhead on our way.

For the next few hours we walked along a nice maintained road, we were all slack packing so Swept Away decided to jog so she could nap while waiting for Salty and I, off she took down the road so Salty and I started looking at the next few towns stops to see if we could figure out a way to get a room and clean up in either Paisley or Christmas Valley.  It would be a stretch but once we met Swept Away up the road, we could go about 3 more miles making a big 32 mile day and then if we did 35 miles the next day we could end in Paisley, and get a hotel room to clean up. 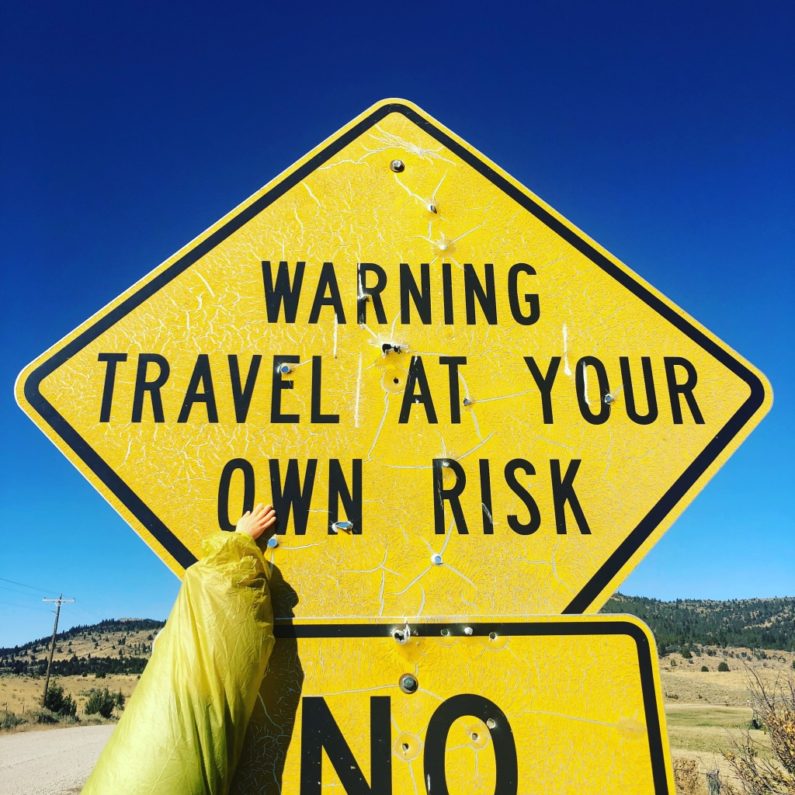 I only had to mention the word shower and Swept Away was all in, “get up let’s go” she said, so with that, we walked well into the dark before crashing on a soft bed of pine needles for the night.  While we cooked dinner I called to make sure there was a room available for us, and indeed there was.  So we joined Ron in the van while we ate and said our goodbyes, as we wouldn’t see him again until we finished. 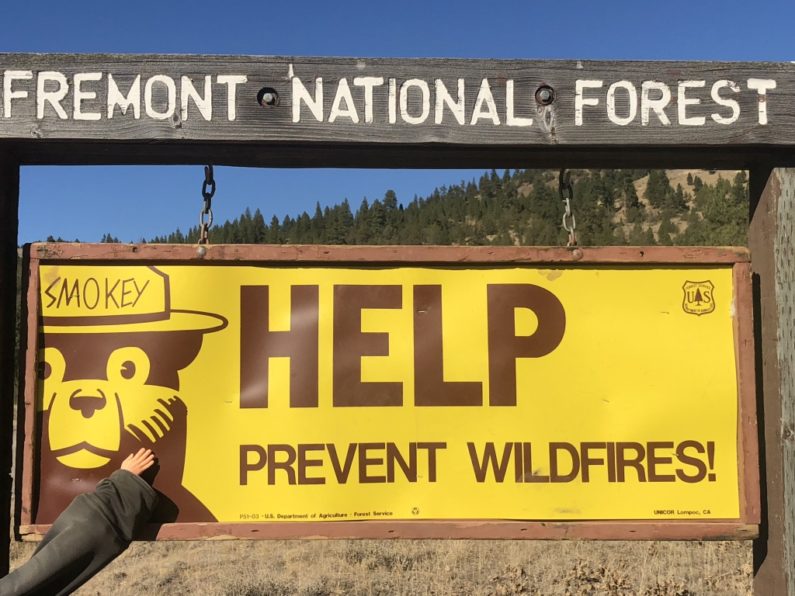