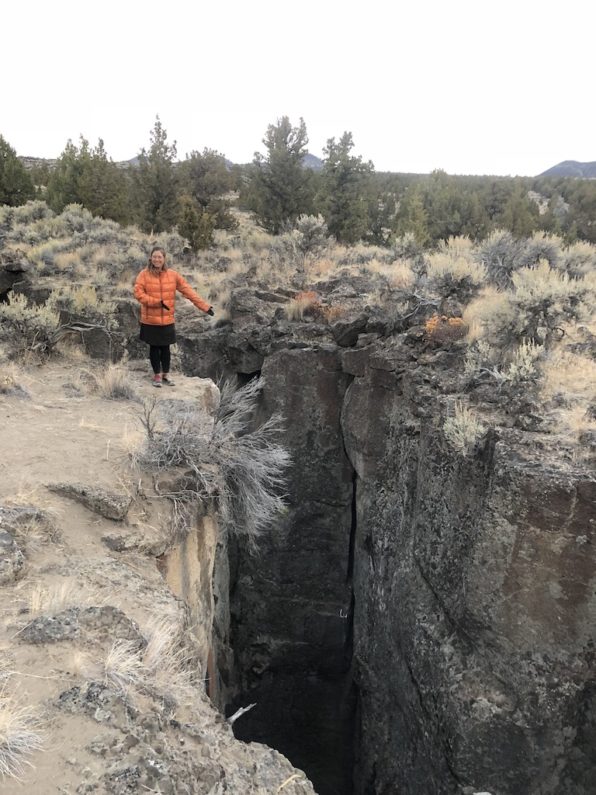 “Look a Crack in the Ground”

We had looked over the maps the day before while sitting in Christmas Valley and the terrain looked flat and easy.  Most of the day would be spent on secondary or primitive roads and we should only have 7 miles of cross country.  We figured with that with what we knew and our early start we could make it 34 miles up the trail to where our water was cached by She-ra last week. 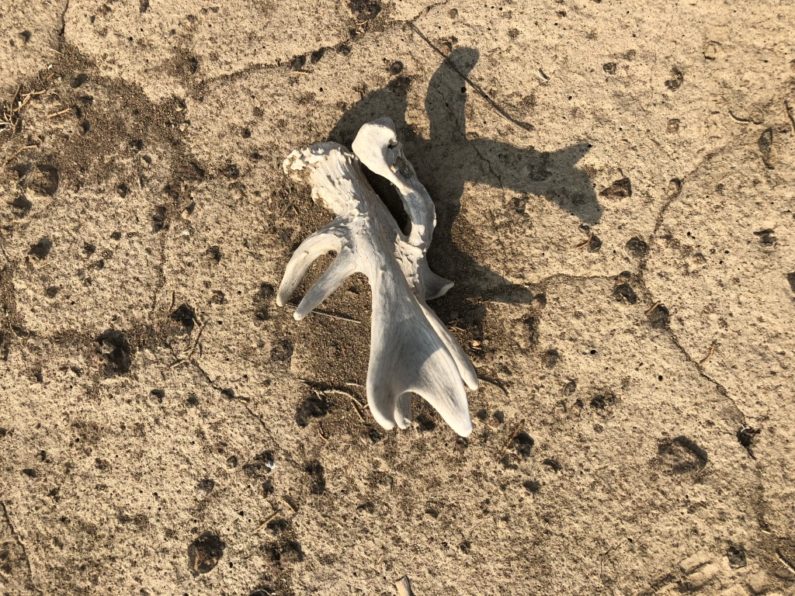 We walked in the dark and decided to take the road up to Crack in the Ground picnic area to see the geologic wonder since walking along it in the dark on a cross-country route didn’t seem to be a wise choice.  We walked up the road in the cold air and as the miles dropped off the sky lightened up to reveal an overcast sky.  We arrived at the privy and trailhead for the Crack in the Ground picnic area, we dropped our packs at the info kiosk and as the sun was brightening the sky we walked over to take a look at this crack in the ground.  It was cool to see, a deep figure in the earth which had created a basalt slot canyon.  Swept Away told us that when the pioneers settled here they used to use this geological feature to store their ice through the summer since it was a deep cold area the sun couldn’t reach at the time.

After our geology stop, we loaded back up our packs and set out again on our supposedly easy day of hiking.  The sky which we thought was overeats turned out to be smoke from a forest fire somewhere in California most likely.  The air was heavy and the smoke gave the day an ominous feel as we hiked along.  The miles were passing quickly under our feet until we came to our first cross country section.  The roads needed and we quickly entered a large Ponderosa Pine forest, this was the fabled lost forest of this area, and even though it was overcast any chance to walk through a forest on a desert hike is a welcome change. 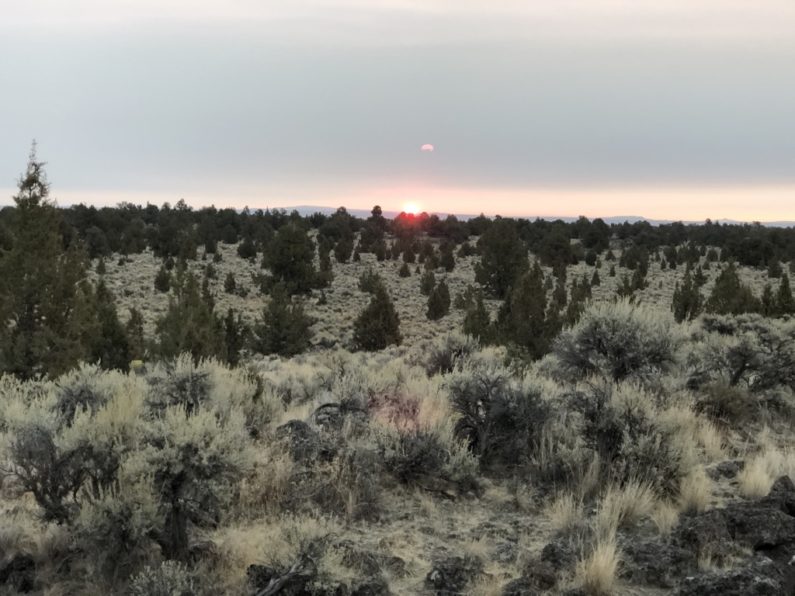 The cross country hike it looked flat on our maps had another trick up its sleeve to make the going slow, soft sandy soil for miles and with all the trees we found ourselves having to continually check our bearing as we hiked on.  The hike had us going top and down hills through the forest and the soft sand slowed our pace. Eventually, we got careless as we moved along and soon discovered we were misplaced from the route.  We shot a bearing and headed on toward the line on the map and hoped we would get to where we needed to go.  After much time walking through the sand we finally passed a dry cattle tank and came to a faint dirt road that was the official ODT.  We stopped for a late afternoon break and marveled at our lack of progress and noticing the time was getting late conceded that our chances of making our water cache were slim. 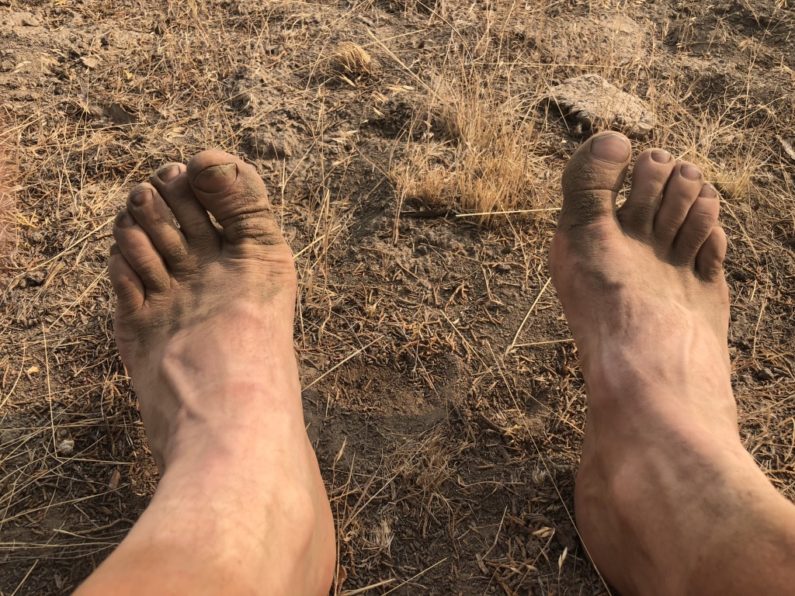 These poor little feet have taken a beaten on this hike

We wrapped up our break and took off up the road, as we walked along talking we came to some junctions that were confusing, we thought we had picked the correct one until a mile or so later when we realized we had not.  The sun was getting low and off in the distance we saw a water tower far away.  We dropped our packs and hoped there would be water there for us since our reserves were getting low I grabbed some water vessles and told the team I would walk up the road and see if there was water.  I trudged the 1/2 mile up the road and came upon 2 dry troughs, right as my heart sank, I turned and saw the their trough was full of water.  I filled the bottles, and marveled at our luck.  Then I walked back to meet the team and give them the good news.

We loaded up our new found water, strapped on our packs and started up a road that would connect back the actual route.  We had only gone a mile or so when we came upon a wonderful camp spot among the trees we about 8” of deep soft pine needles.  The sky was nearly dark and since we were all bushed we called it a day and set up camp.  We laid around cooking dinner, telling jokes and talking about the end of the hike.  We had some miles to make up but by stopping a bit early and having trees to block the moonlight we all know we would sleep better and make up our lost time the next day. 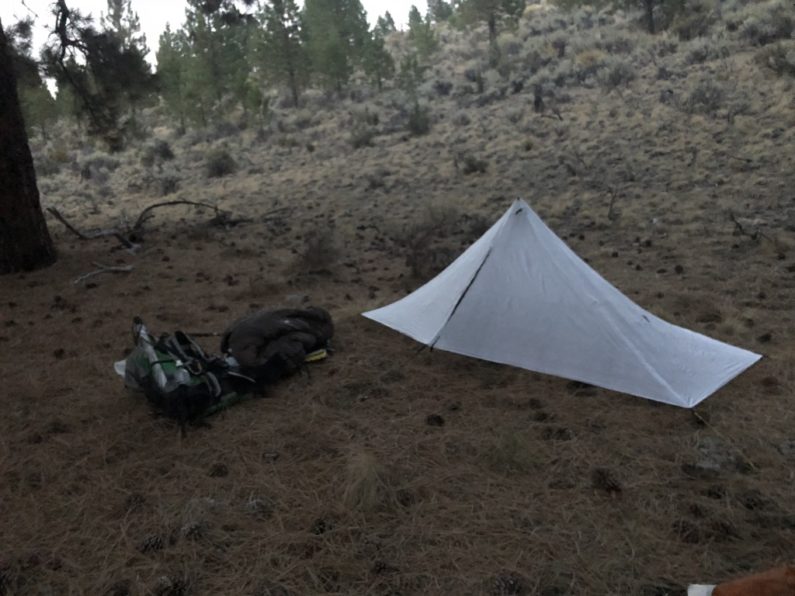 Testing out the prototype of the Deschutes DCF tent from Six Moon Designs, not because the weather dictated I needed it, but because I promised the crew at work I would test it out for at least one night.